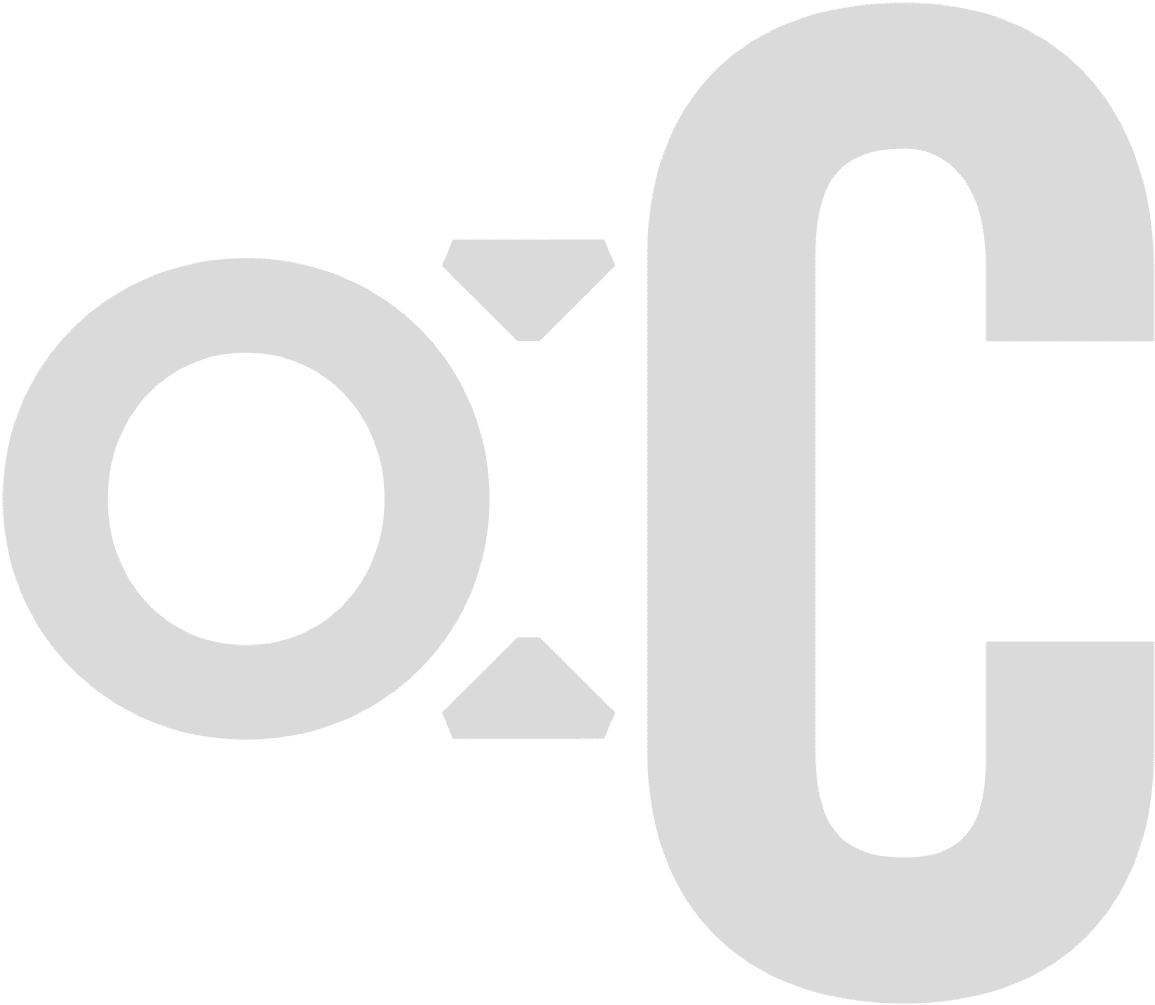 But there are other ways for the production of Active Pharmaceutical Ingredients: the extraction of natural molecules. And the need is extended beyond pharmacy in the cosmetics, perfumery, flavorings, food supplement industries.

For this industry, CELSIUS has developed the NECTACEL process for the extraction of natural molecules using liquefied gases.

The Greek gods on Mount Olympus possessed a natural resource with great properties, a drink that rendered them immortal: nectar (νέκταρ).

For mortals, CELSIUS has developed NECTACEL extraction processes and equipment.

Nature contains a wealth of molecules with very interesting properties for humans, for healing or simply for their well-being. Nature is an infinite resource for cosmetics, flavours, scents, nutraceuticals, etc.

Many organic molecules can be used for their active principles, their flavour, their odour, their nutritional properties, or for other specific properties that, when combined with others, are of great importance.

CELSIUS builds NECTACEL facilities for solvent-based extraction of plant or animal molecules. Extraction, followed by separation of solvent from extract, are performed at atmospheric pressure, under vacuum or under pressure, either with or without stirring.

Each unit is designed for a specific matrix and extraction solvent:

By extraction of natural molecules, we mean any process used to transfer molecules from a solid animal or plant substrate to a liquid phase.

Depending on the trade, the raw material is referred to as a matrix, load, solid, plant, drug, bagasse, etc. Once consumed by the extraction process, there remains a cake, spent solids, draff, marc, insolubles, inerts, residues, etc.

The following can be distinguished:

The extraction of natural molecules relates more specifically to the dissolution of the molecules of interest in a solvent.

The extraction process can also be used with the opposite goal of extracting an undesirable molecule from the matrix, such as for example in the case of degreasing, the noble product being the refined matrix.

An essential step in developing an extraction process is selecting the appropriate solvent. What are the criteria behind this choice?

The criteria entering into the choice of a solvent are as follows:

Solvent selectivity is a secondary criterion in the choice of solvent. The aim is to extract only the molecule of interest from the matrix, leaving any undesirable molecules behind. This criterion is only secondary however, as the various extracted species can be separated during the subsequent purification phase.

The ethical choice of a solvent and an extraction process is also based on notions of:

Extraction processes differ depending on whether the solvent is gaseous, solid, liquid or supercritical:

In this process, the extraction solvent is water vapour that entrains the molecule of interest by forming an azeotrope. The extracted gaseous solution condenses in a mixture of two non-miscible liquid solutions, one aqueous and the other organic. The organic solution contains the molecule of interest.
This process is used to extract essential oils. It is limited to extracts that support vapour temperature.

In this process, the solvent is solid and the extraction product is a solid solution. We can mention the case of cold enfleurage, in which flower petals are placed by hand on a layer of grease. This process is difficult to industrialise.

Many liquid solvents are used at both the laboratory and industrial levels:

These solvents are liquid during the extraction phase, under normal temperature and pressure conditions. For the solvent and solute separation phase, they must be brought to gaseous state, either by increasing the temperature, reducing the pressure, or by combined action of the two.

The process is implemented taking the following into consideration:

Liquefied gases are solvents in gaseous state under normal temperature and pressure conditions. 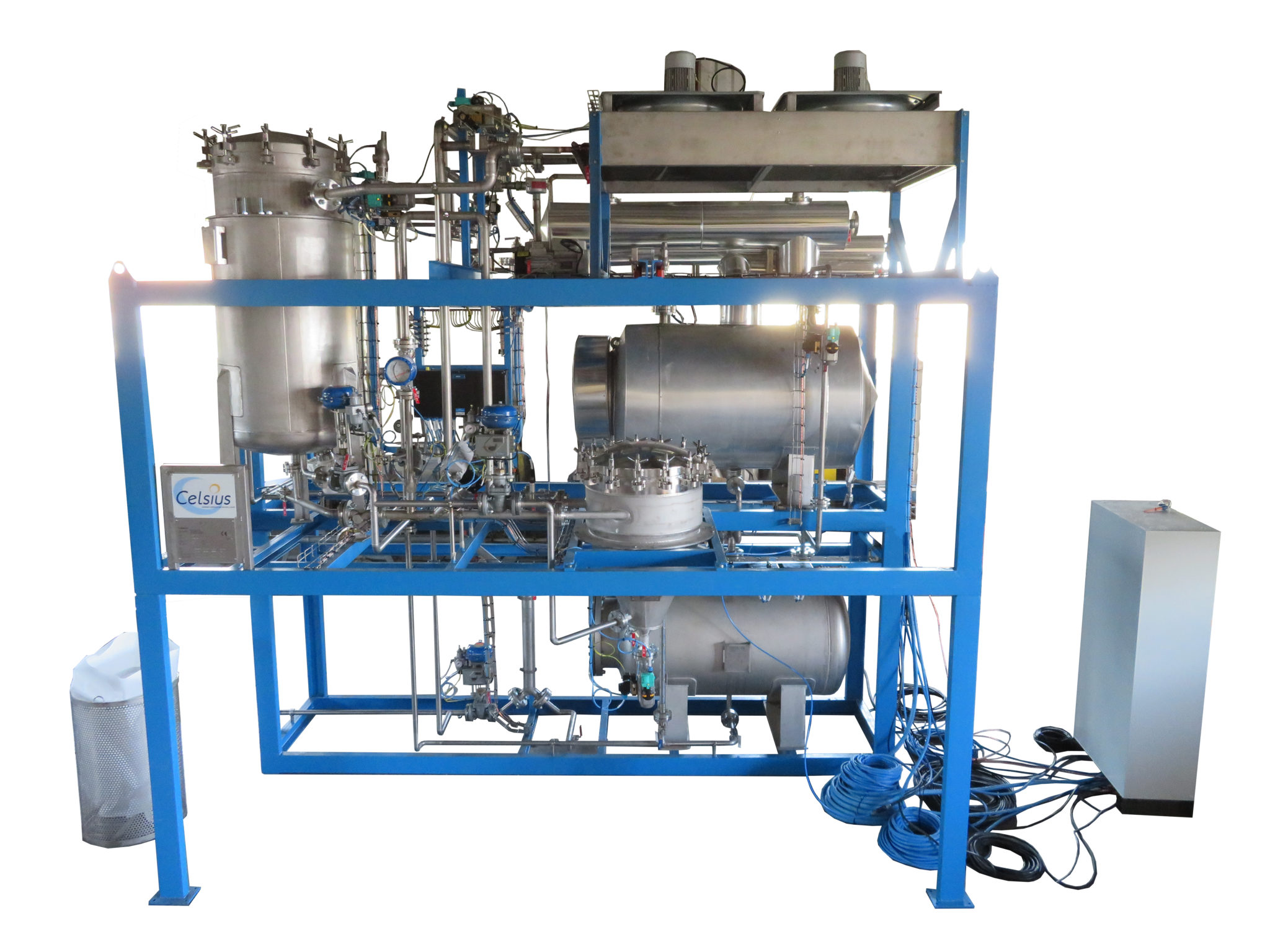 The advantages of this technique are as follows:

The general schematic is that of liquid solvent extraction, evaporation, condensation and solvent recycling: 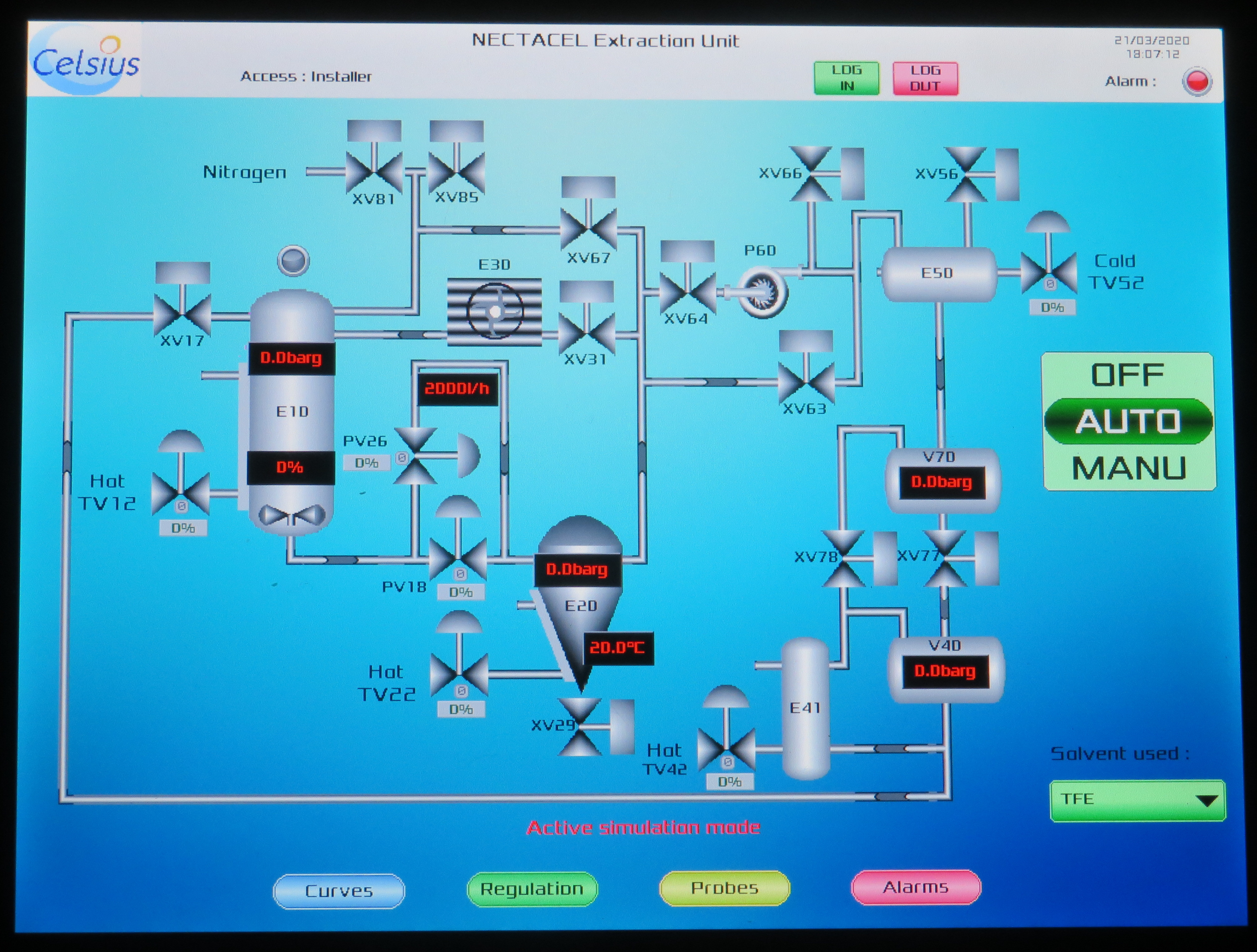 The process is implemented through the following successive phases:

At each moment, in the extractor, in the evaporator, in the condenser and in the storage tank, the solvent is at evaporation equilibrium:

The liquefied gas extraction process and system, with solvent recycling and without circulation pump, have been patented by CELSIUS.

The main thermodynamic characteristic governing the choice of solvent is vapour pressure.

These two criteria are economic optimisation criteria in an industrial context.

Two gas families that are inert with respect to the extract are considered:

The following diagram lists the vapour pressures of the main liquefied gases compared to conventional solvents: 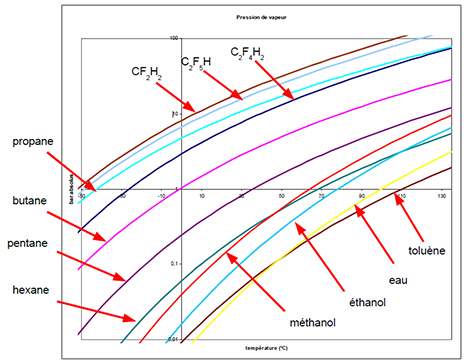 This diagram allows the solvent to be selected according to the above-mentioned criteria:

From a technology point of view, the operating conditions are easier to achieve for butane, and butane is classed as a “green” solvent. The use of butane, however, generates an ATEX zone.

On the Mollier diagram for butane shown below, the solvent’s progress during extraction and evaporation is shown.

In this isobaric and isothermal CELSIUS process, solvent evaporation and condensation are performed under the same temperature and pressure conditions. No pump or solvent compressor is required to complete the cycle, nor for solvent recycling or injection.

For tetrafluoroethane (TFE or R134a) extraction, the operating pressure is slightly higher, as shown in the following Mollier diagram:

To fully understand the benefits of the CELSIUS process, the above Mollier diagrams should be compared to those of the Mollier processes described in the following chapters.

Moreover, for the separation phase, liquefied gas extraction is also better than conventional solvent extraction.
Due to the evaporating temperature and solvent/solute phase diagram differences, it is easier to separate the solute from a liquefied gas than from a conventional organic solvent.

The industrial property of the described process and system is protected by patent.

The applications of the liquefied gas extraction process are studied in a confidential manner for CELSIUS customers. The main aim is to extract molecules for use as pharmaceuticals, cosmetics, flavours, scents, nutraceuticals, etc.

This same tetrafluoroethane (TFE or R134a depending on refrigeration naming conventions) can also be used as an extraction solvent, but according to a totally different process.

In this case, the refrigerant property of the fluid is used: the solvent follows a Carnot cycle by means of a gas compressor, according to the path shown on the following Mollier diagram:

Small-scale applications have been implemented using repurposed refrigerating units. In addition to the complexity of its mechanical parts, this process suffers from the additional energy consumption of the gas compressor.

When this extraction process was discovered, supercritical CO2 appeared as a highly promising solvent:

The solvent follows a Carnot cycle, thanks to a liquid solvent pump, according to the following Mollier diagram.

The maximum operating pressures of the equipment increase the investment costs of a supercritical CO2 extraction unit and limit equipment capacity.

In practice, the supercritical CO2 extraction process is limited:

The pressurized extraction process developed by CELSIUS is intended to allow the extraction of any polar or non-polar plant or animal molecules.

The investment cost, lower than for supercritical CO2 and requiring a less complex infrastructure, enables extraction units to be implemented at the raw material production site, thus processing the raw material without incurring any additional transport costs. 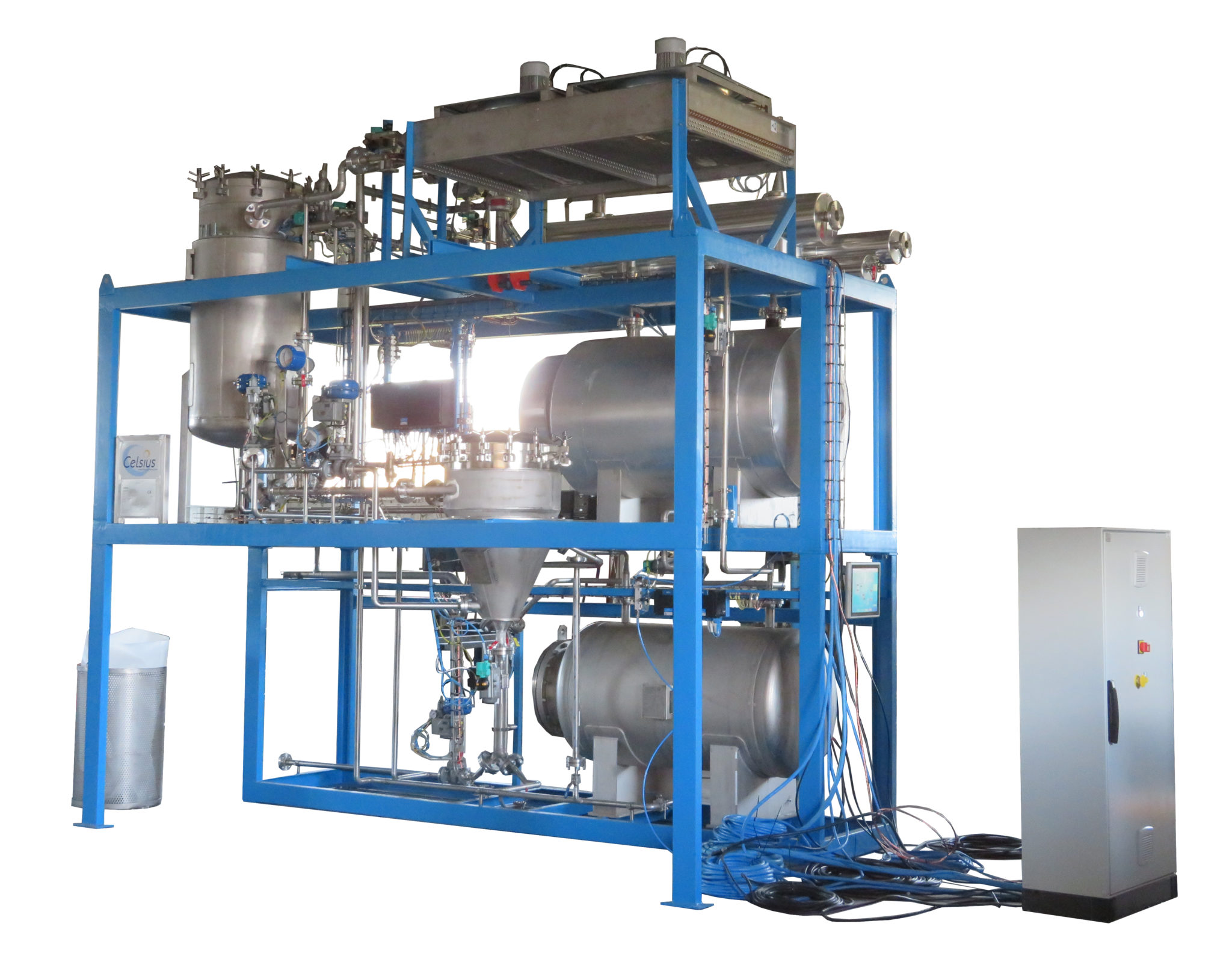 The use of liquefied gas as an extraction solvent presents many advantages:

BUTANE, HFO1234ze and DME (dimethylether) are the most commonly used liquefied gases in nectaCel extractors. 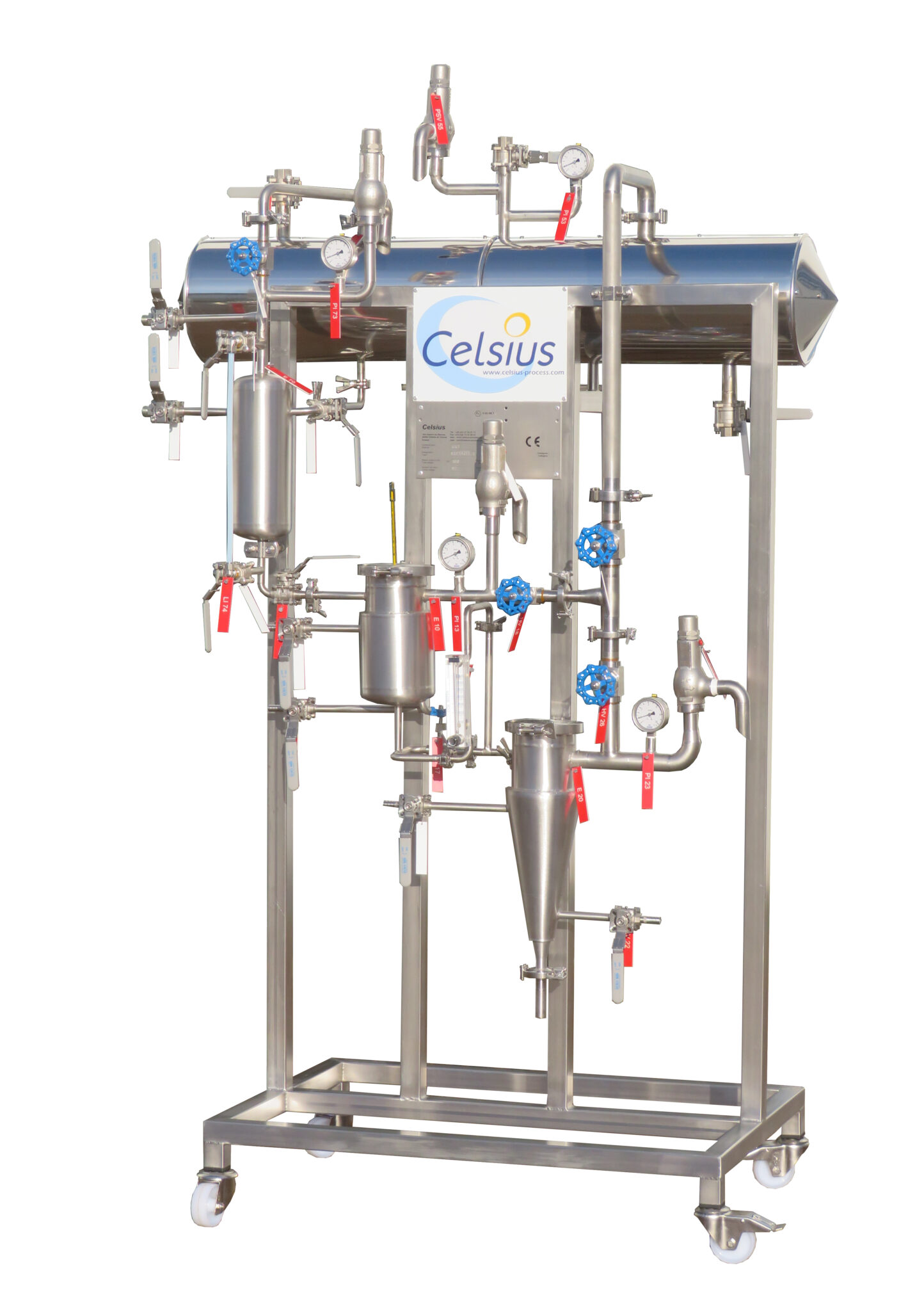 Depending on its nature, the extract is obtained as a liquid, powder, suspension or as a solution in a co-solvent. The spent matrix is dried before the extractor is reopened.

The extraction process can also be used with the opposite goal of extracting an undesirable molecule from the matrix, the noble product being the refined matrix.

CELSIUS studies your needs with you. Qualitative tests can be performed by Plateforme d’Eco-Extraction de Valréas using pilot extractor of 1 liter capacity.

Solvent extraction process applications are studied in a confidential manner for CELSIUS customers.

Tell us what you need using our contact form 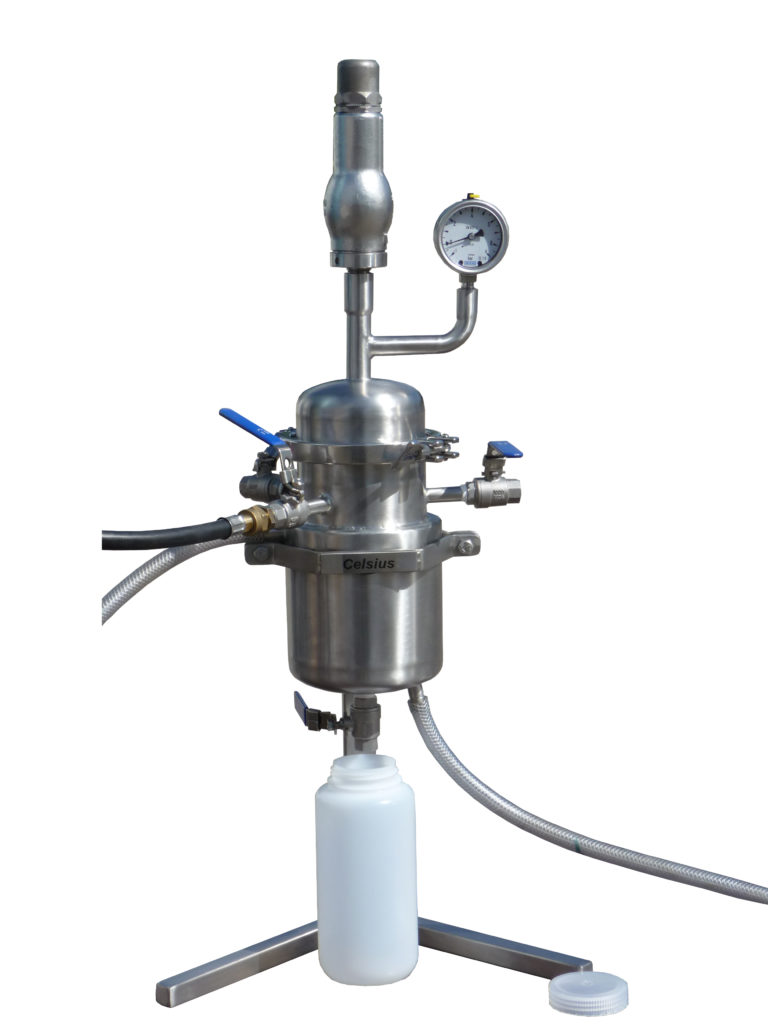 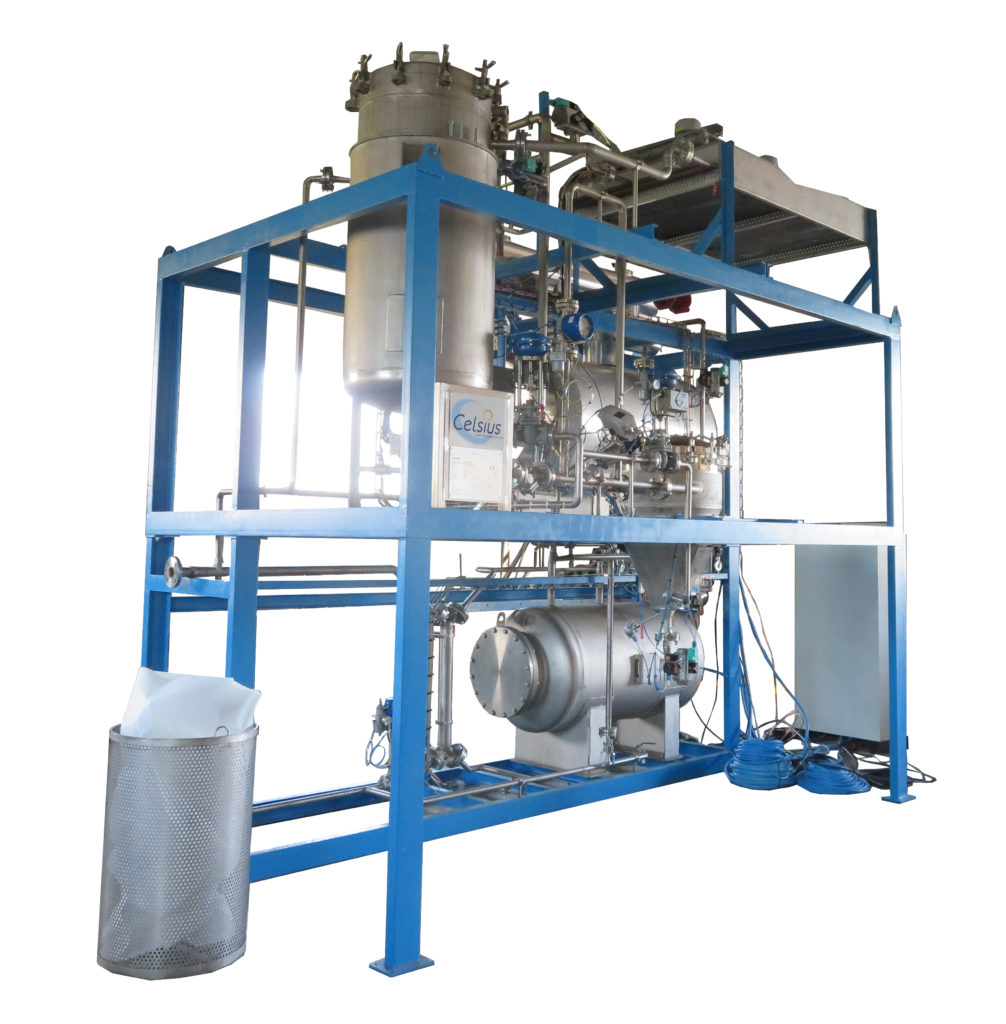 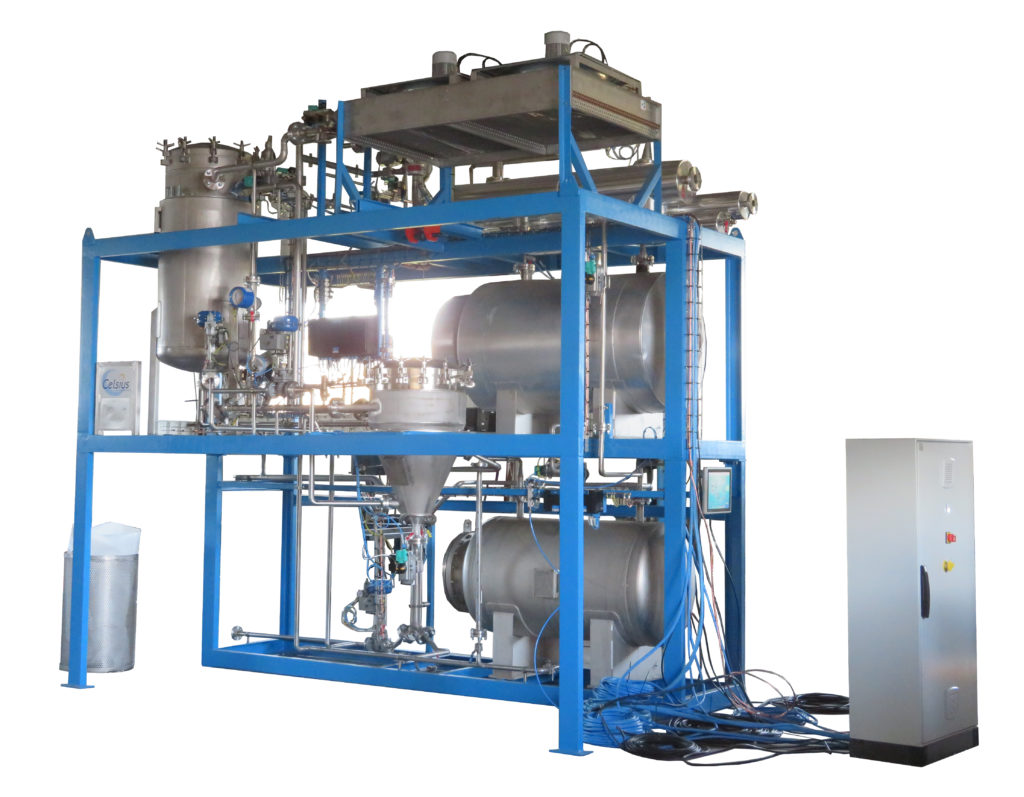 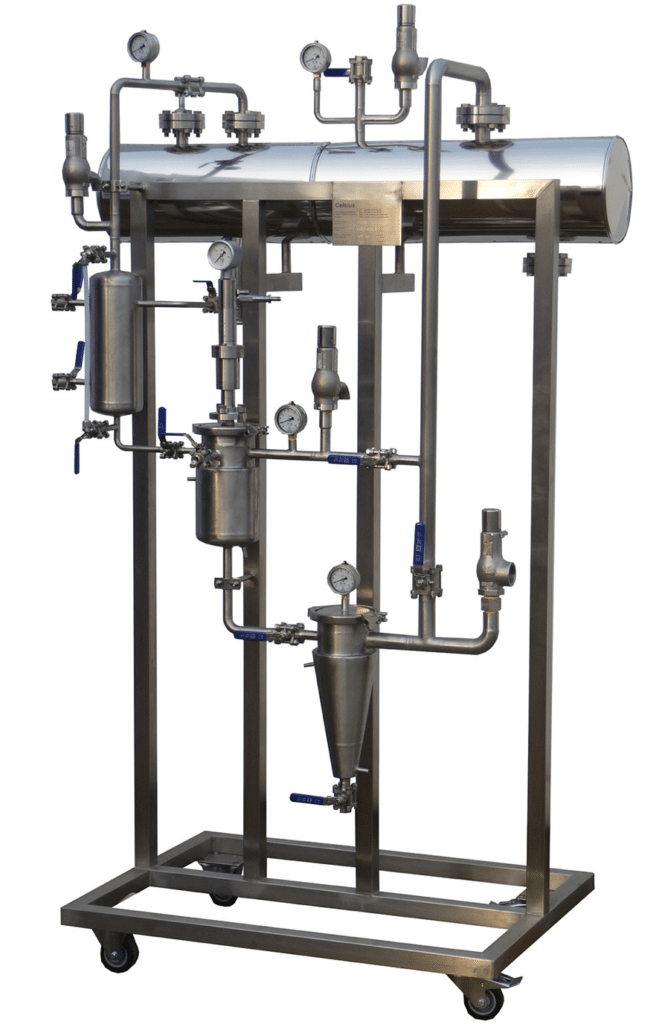 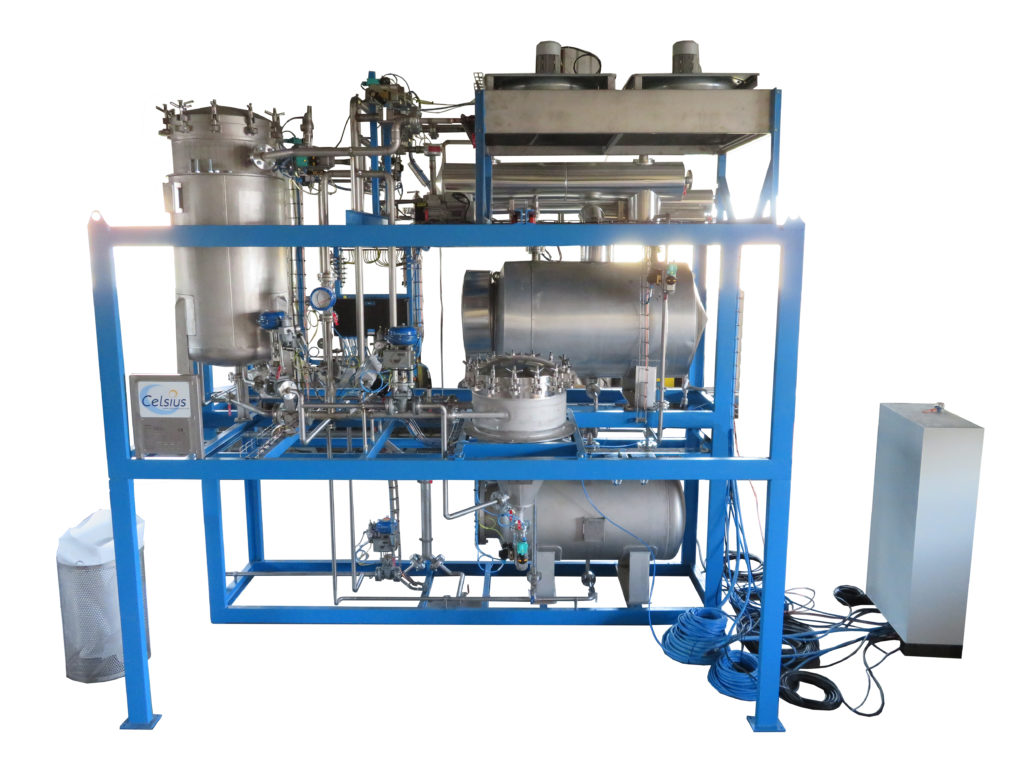 Many articles have been published in scientific journals. We communicate publications that compare our extraction process to other processes, publications in which we have participated.

For copyright reasons, we only communicate the first page of the article published in “Techniques de l’Ingénieur”.

In addition, it may be difficult to find the properties of the solvents used in the extraction units. You can download here the enthalpy diagrams, called Mollier diagrams, of these solvents.

An original approach for lipophilic natural products extraction: Use of liquefied n-butane as alternative solvent to n-hexane

Feasibility of using liquefied gas HFO-1234ze (trans-1,3,3,3-tetrafluoroprop-1-ene) as an alternative to conventional solvents for solideliquid extraction of food ingredients and natural products

Discover one of our key process : Temperature regulation